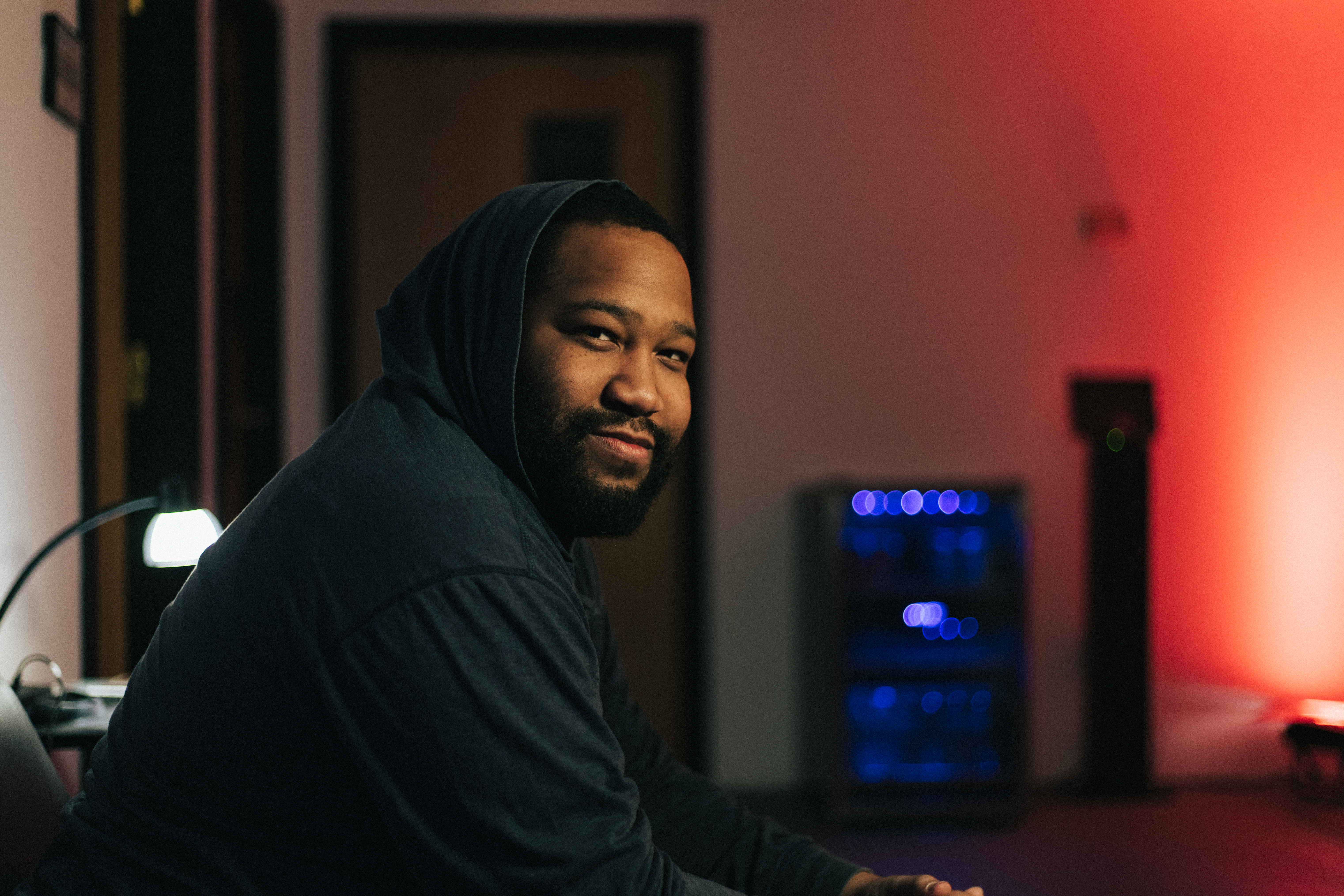 The following is an interview with a good friend and amazing content creator & musician. My friend Nick a.k.a. Studio Nicktendo. Nick has an interesting story about how he got into video games and music as well – and how he merged the two genres. Keep reading!

LR: Tell us a little about yourself Nick. How did you come up with the name Studio Nicktendo?

SN: Well I used to have a YouTube channel dedicated to gaming news and topics. Mostly Nintendo news. I used to do podcasts all the time with the homies. (#ChillSquad. We still out here! LOL) Anyways that channel was called Nicktendo Direct, People can still find it to this day. About year 2 or 3 of the channel everything just got stale to me. Trying to keep up with the fresh news (If you recall before the pandemic gaming news was just WILD, something new was happening every week) was just exhausting. I’ve been a musician pretty much my whole life and before my live streams on the ND channel I would always find gaming remixes to play before, whether it was hip hop, rock, etc, I would just jam those tracks.

To be honest, a gaming cover channel was something I always wanted to do but never had the confidence to do. One day I just decided to run with it. Give it a shot. In regards to the name, I wanted to keep the Nicktendo name just for some familiarity if anyone wanted to follow me from the topic channel to the music channel. Honestly, I put my name into a name generator just to come up with ideas. There were a lot of good ones but nothing clicked. I saw there were a lot of names with “studio” in it but nothing that stuck out. So I just took the “Studio” part and just added “Nicktendo” to it, and here we are today! =]

LR: When did you first get into music?

SN: I always liked music for as long as I can remember. My mother was a pianist at church and I’d always sit behind her every Sunday morning and night. Even some Wednesdays. When I was younger I could always play single-note melodies by ear on her piano at home. I’d play stuff from movies I liked and stuff. The first song I remember was the “Forrest Gump” Theme from the movie…whatever that song is called LOL.

I started playing music seriously in band (class) though. I was a percussionist and a jazz band drummer in middle school all the way until high school. I didn’t start learning guitar until my Junior Year in high school. At that time I became obsessed with Punk and Hardcore music. I’d go to Warped Tour and every bar show I could back then. Good, sweaty, times in the mosh pits. I’ve taken plenty of L’s in the pit though, haha!

LR: When did you first get into video games?

SN: Much like music, my mom bought me an NES (Nintendo Entertainment System) when I was 4-5 years old. Her brother was a big gamer and she said I was like him in a way. So she bought me the NES. This was well after the SNES (Super Nintendo Entertainment System) was out so she got one at a good price. I remember playing Mario one, two, and three. That was about it though. My cousin had a SNES and Sega Genesis so I’d usually run up to his house and play games with him.

He’d beat the breaks off me in Street Fighter, MK (Mortal Kombat), Madden, NBA Live, and WWF Royal Rumble. Finally, I convinced my mom to get me the SNES, then she surprised me with a Playstation 1 Christmas. That was all she wrote after that. If she didn’t get me that PS I probably would have just stuck to playing sports…which probably would have been better for me because I was an all-state athlete in school and was even offered Division 2 scholarships. But I didn’t want to practice. I was done with sports by then. I would rather play video games and practice music back then LOL.

LR: I see you have both a twitch and YouTube channel. What made you get into making video game content?

SN: Much like my music channel, I always wanted to make a YouTube channel for gaming. I loved watching ModernWarNegro (now The Black Hokage) and the whole Gaming Illuminaughty crew, Dashie, etc (Except PewDiePie, I was never a big fan of his). It was something I always wanted to do, BUT I didn’t have the money or time and honestly just never googled it. It wasn’t until my buddy Saltiest Gaming started a YouTube channel when I really pursued it. We’d help each other out and stuff.

At this time I just purchased my Nintendo Switch and loved it so much I went the Nintendo route with the channel. He was an Xbox channel at the time (now he went to the evil empire, Sony LOL). We had an idea to create a crew; one person makes Nintendo based content, one for Sony, and one for Xbox, and create a neutral kind of channel for all platforms. But it never worked out. The gaming community would rather fight about companies they won’t own or work for.

LR: At what point did you want to start doing covers for video game music?

SN: April 2019. MAN…time flies. That was when my first video for the channel came out called Aquatic Ambiance from Donkey Kong Country.

LR: Is there a particular song that brought you down that path?

SN: So in 2018 I had a ROUGH year financially and mentally. My wife and I almost lost our house, I was having issues at work. It just wasn’t great. The game that helped me through that time was Undertale. It had been out for a while but I’d never played it. It finally dropped for the Nintendo switch and for whatever reason I just adored that game. I loved the music. It just helped me to cope with everything!

So all I did was look up the OST and remixes for the OST etc. I stumbled on RashaadEB‘s YT channel. He has some KILLER covers of the music. His Asgore cover really was the one that sticks with me even until now. Starting a cover channel wasn’t an idea in my mind at the time, but I can say, without a shadow of a doubt – if it wasn’t for discovering his channel and being inspired, my channel probably wouldn’t exist!

LR: What was the most challenging song you had to do a cover for, and why?

SN: Right now there are A LOT of unreleased Xenoblade Chronicles 2 songs I haven’t released for that very reason. I stink at playing leads. At least I think I do, actually…I KNOW I DO. I just never had the technique down. However, I am practicing right now to get these songs out so keep an eye out for those!

LR: What made you want to pick up the guitar, and do you know how to play any other instruments?

SN: I picked up the guitar out of necessity. I always wanted to be in a band. Finally, a group of friends and I decided to start a band; I was going to be the drummer and they were going to play the other instruments. At the time we were TERRIBLE musicians – they could hardly learn theirs! I remember one time I went to my buddy’s house and was reading his book and started learning how to play the guitar.

We had a buddy who would play drums already, so we asked him to play and I was going to play guitar, and my buddy who I was replacing at guitar would move to bass and our bass player at the time would move to guitar. Think of it like musical chairs but with instruments, and voila! History was made. From there, I just learned keys, and bass and that was it, Those are my four instruments.

LR: What is your all time favorite video game, and why?

SN: That’s a tough one because it switches between Mass Effect and Legend of Zelda. Recently I’ve been playing the Mass Effect Trilogy and I’ve just fallen in love with that franchise all over again BUT at the same time (sneak peek for the readers) I’m working on a Legend of Zelda Lo-Fi cover album. Let me just say this; you don’t want to miss it!. With that said, I’ll have to say…for right now as I’m typing this, Mass Effect by a hair. A really really small hair…..from my beard.

LR: What do you envision for your channel and for your content, and what is your ultimate goal?

SN: As I mentioned before, I’m currently in limbo with the channel. I love making pop punk covers of these songs but I’ve been experimenting with a lot of Lo-Fi music and so the channel is about to be a blend of the two genres. I have no clue how. But I am going to try. Ultimately my goal is to be able to live off the Studio Nicktendo brand and even branch into music production and engineering for bands and/or even for Video Game OSTs. I’d love to write for one game in my life. Even if it’s just a small indie game. I think it would be a lot of fun.

LR: If you could go back in time and give your younger self any kind of advice, what would you say?

SN: START YOUR DAMN YOUTUBE CHANNEL IN 2011 WHEN YOU WANTED TO NOT 2017 WHEN IT’S ALMOST TOO LATE! I believe I would have and could have benefited from starting early before YouTube really took off as an entertainment medium. So that would be my advice to my younger self.

A word of advice to all of you reading this: it’s never too late to start working on your dreams. Nick is the perfect example of how you can have a “late start” to the game and still experience success and growth. Nick did a pivot from his original gaming channel to his music channel, and has amassed 2.73k subscribers and garnered over 100k views on his channel in a short time. Check out his channel here and subscribe so you don’t miss the amazing content that he has in the works!